I had a couple of games against Epoc under the Scandinavian Museums' Hnefatafl rules, and the games confirmed that with those rules (11x11 board, king captured from 2 sides, win in corner) the king has not a chance when black doesn't make severe mistakes.

Feel free to try out the Scandinavian Museums' Hnefatafl anyway - the results from this version are not included in the ratings.
Top

These numbers indicate a real heavy unbalance of Skalk 11x11 in favour of the attackers.
The five highest rated players out of the nine didn't lose a single game as black, and the sixth and seventh lost only two and one games as blacks. That is, for strong players the balance here is white 0% - black 100%...!

The Skalk 11x11 rules made the running in Denmark and possibly in Scandinavia. They were stated in the book "Bræt og brik, Spil i jernalderen", Wormianum 1992 (Board and Piece, Games in the Iron Age), and the same rules are repeated in the later collection of old board games "Den store spillebog", 2000 (The Great Game Book).

The Norwegian Arild Hauge publishes the Skalk 11x11 rules on his web site:
http://www.arild-hauge.com/vikingspill.htm
and states as the source of the rules The Archaeological Museum in Stavanger, Norway.

So does the open air museum Land of Legends in Lejre, Denmark.

In the 1990'ies the Swedish firm ExpoMedia used the Skalk Hnefatafl for an educational computer game, only reducing the board size to 9x9.

The game version with enclosed Skalk Hnefatafl 11x11 rules was sold from museum shops in Denmark from 1992 until recently, and also in rest of Scandinavia.

This photo from Roskilde Viking Ship Museum September 2012 shows a mix of two rules sets. The game box is produced by the firm Memory, and the enclosed box rules are the History Craft rules. But beside the box on the grey paper you find the Skalk 11x11 rules. Also, in the exhibition hall where the public can try out the Hnefatafl game, the Skalk 11x11 rules are the rules used. 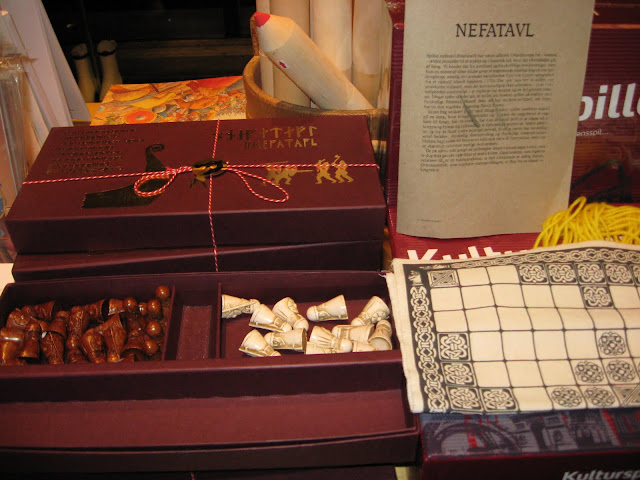 Eight players did the Skalk Hnefatafl 9x9 test tournament and played against each other 56 games, the results being:
18 white wins (defenders) (32%)
38 black wins (attackers) (68%)

These numbers indicate a severe unbalance in favour of black. 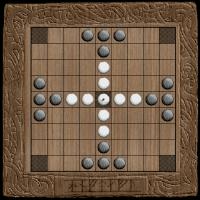 Skalk Hnefatafl 9x9 has a special history: In the 1990'ies there was in Sweden a firm called ExpoMedia, which created software for history exhibitions. One of its products was a computer program playing Hnefatafl. The program was also given free on the internet for many years in the form of a web page with a Hnefatafl applet. The page was so popular on the net that it to this day is still referenced from 184 other sites, even though it ceased to exist twelve years ago. The tafl variant used was Skalk 9x9 (with one tiny detail different: the throne was always hostile to everybody, also when occupied by the king. This difference hurts white only, and tips the balance even further.)

The picture shows ExpoMedia's board from the old internet game, drawn by a Swedish artist. On the board the word "hnftafl" is carved in runes.

- and you can still see the whole ExpoMedia Hnefatafl site here (try click the links and see the subpages too, the design is impressive):
http://web.archive.org/web/200106031236 ... se/tablut/
Top

Hello. I am a Scandinavian historian and a have extensive knowledge of the sociology of games. About 4 years ago my colleagues and I did some research and "roll-out analysis's" (you backgammon players know what I mean) on this variation. I am in the process of compiling our research again (as we did it just for a footnote) and, when all found, I will post it to this forum.

But the jest of it was this...

1) Due to the beliefs of the Norse people, throughout the time this game was played and found in their literature, the king would have been killed with being attacked on 2 sides not 4.

2) Game-play. Being that the attackers have a numerical advantage, the player who was them would have the upper hand. In the class structure of the Norse people at that time they believed in equality in people of the same class (and even women). With that in mind, we believed that a game of Hnefatafl would have been won or lost on the outcome of 2 games. Each player would take their turn as the attackers and defenders in turn. If each player won a game, the tie would be broken 3 different ways.

If you both won with the defenders, the person who won with the least amount of turns win. If you both win with the attackers, it goes by least amount of turns once again. In Norse military culture a swift attack (or escape from danger) would be something of valor. They did champion the "Blitzkrieg" attack of the day. And finally if one person won with defenders and the other with the attackers, the defenders (kings side) would be the winner. This is because the lesser numbered army had won. This also held true in the roll-out.

3) Roll-out. Like I said, I do not have the exact numbers as of yet but this is the basics of it. By playing the 2 game "rubbers", it gave the game a kind of duplicate bridge type of numbers. The 68% average score of players it was almost even for wins and losses. But there were outlyers of the people who were just poor at the game, or were either great (or played near perfect strategy). But after looking at the numbers, we deduced that the rubber matches evened the playing field to the point that neither side (defender or attacker) had a significant advantage. Thus this changed the game to a game of who has the better overall decisive strategy, than one of just simply who won or lost a certain game (due to the offset of the respected pieces).

I hope this information is helpful for everyone. But you can see the philosophy of the game here. It is about who is better overall and who is more decisive in "battle". This were virtues of the Norse people of that time, and it makes sense for the game.

Thank you for reading.
Top

Rynoknight wrote: 1) Due to the beliefs of the Norse people, throughout the time this game was played and found in their literature, the king would have been killed with being attacked on 2 sides not 4.

Thanks Rynoknight, some interesting suggestions. Most of my thoughts about what you say are well covered by Crust's perceptive questions about the strategies that logically result from paired games where the winner is he who wins in the fewest moves. I'd be very interested to hear what you think about that, as your reply to Crust didn't mention it.

In response to your suggestion about having two side king capture in accordance with Norse belief systems, I'd like to put forward an idea I came upon while working with archeologists and viking historians in Vestfold Norway.

As you say, "Kings were mere mortals, but had the possibility of something greater AFTER death", this is perhaps the viking concept of 'ettermæle', ones 'legacy' in the form of stories told about your actions down through the ages. In short, how one is remembered. And death in battle was it seems something of a goal in life.

According to the viking experts I work with, a viking king or chieftain would rather die than turn tail and flee from a battle field. They say the idea of running away, of ditching your fellow warriors and beating a hasty retreat, was simply not an option for a viking. Vikings expected songs to be sung about their deeds through the ages, and I doubt they would have enjoyed the Monty Python song 'brave sir robin' being dedicated to them: 'when danger reared its ugly head, he bravely turned his tail and fled'. So it occurrs to me; that chap in the middle of the hnefatafl board, he is not a viking king. He is some other king or figurehead being attacked by vikings. Or if he does represent a viking king, he represents a coward, a turncoat, not worthy of the viking name.

That said, I for one would be happy to take part in a tournament set up on Aages site according to your rules and suggestions, where moves are counted and games one according to decisive strategy. If such a tournament happens I hope you will join in the fray!
Top

The attackers win by taking the king. This is achieved in the usual way by sandwiching between opposing pieces or against a corner-square, but if His Majesty is standing upon his centre-square it is necessary to sandwich him in on all four sides with four opposing pieces. If he is standing on one of the squares to one side of the centre-square the same applies, though here only three opposing pieces are required, the fourth being replaced by the "forbidden" centre-square. The attackers have also won if the situation arises that all the defender's pieces have been rendered immobile by encirclement.

So Skalk Hnefatafl already in 1992 had a surrounding rule like the one we introduced to Copenhagen Hnefatafl.

The Skalk rules were based on the work of David Brown, UK, who also have the surrounding rule:
http://aagenielsen.dk/hnefataflforum/ph ... 1&t=10#p17

Thus the "Monstrosity Fort" problem was already taken care of both by David Brown and in Skalk Hnefatafl.
Top

These figures are consistent with our experience with Skalk 11x11 ever since the start of online human-against-human games on this site Feb. 2010.
At first, Skalk 11x11 was the only tafl game available here for human-human games, but soon it became clear that it was extraordinarily difficult to win as white.
After this, other tafl variants were introduced and tested here.
The many Skalk games from this first time Feb.-Dec. 2010 were unfortunately not recorded for statistics.

The Skalk 11x11 was an archaeologist's educated aim 1992 at the historical hnefatafl rules, and although it misses the mark and doesn't work, it's not too far from it. Reduce the board size to 9x9 and have the king win on edge instead of corner, and you have the Saami Tablut 9x9 which indeed works, and which this community found to be the probable, real historical hnefatafl (9x9 version).
Top
Post Reply
7 posts • Page 1 of 1