Here's the typical 13x13 setup that I am referring to:
Top

Any insights or opinions about which way might be "correct" or at least "better" are welcome.
Top 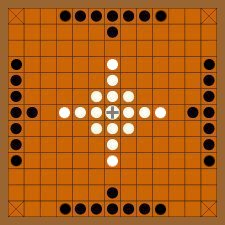 Very possibly a change of board size could also influence the balance and could require a rule change of some kind. Fx. that the king wins on the edge?
This was just some thoughts.
Top

That seems logical to me. I don't know why it's usually assumed that it would still use the same number of pieces.
It seems important that no white piece can reach the edge in a single move.
Top

I'm not sure how many 13x13 boards have been found, but the gokstad one has markings on that lead me to suspect it is not hnefatafl at all being that its markings have twofold symmet. Though maybe it doubled up as a tafl board. Looks more like the asian game shogi. Those vikings did get around so who knows.
Top

http://youtu.be/2ywietPiN4w
Alternative starting position for 13 x 13 tafl. Same number of pieces: 32 attackers (here coloured WHITE) and 16 defenders plus king. In this arrangement, there are NO open files at all, and the attackers already have control of the third ranks - I would suggest this gives them a massive advantage. Haven't played it though, but I expect it would be a very long game, like alea evangelii.
13x13 tafl.JPG
- that version is escape-to-the-edge, not to the corners
Top

The switch from 11x11 to 13x13 is a minor step towards the large boards, and so perhaps you can see the beginning of some large-board features. Fx. the scattered initial ordering mentioned by crust could be an improvement of balance, or it could be a way to reduce game length.
Top

That's probably right. And very necessary to prevent the opening game being too tedious. The larger boards dissipate the game's "energy"... like trench warfare where the trenches are too far apart... and the mid-game starting position looks like a desperate attempt to restore that energy. Unless anyone has a thrilling alea evangelii experience to relate? Any Alea Evangelists out there?
Top

I've finished building a 13x13 set, but I still haven't found time to play it. College has me very busy right now, but I'll give my opinion after some test games.
I know a number of people at my school who are pretty good at this game. I'd start a club for it if I were going to stay at this school. There's a chance I'll start a Tafl club after I transfer to a four-year college though. That would be fun.
Top