Only one setup clearly differs from the rest by being well balanced: Tawlbwrdd Lewis cross!
Last edited by Hagbard on Sun May 15, 2016 9:33 am, edited 3 times in total.
Top

Never the less, this Damain Walker illustration from a historical source does indeed indicate a throne square also for Tawlbwrdd:
http://tafl.cyningstan.com/page/146/literary-sources
Top

Hagbard wrote:Never the less, this Damain Walker illustration from a historical source does indeed indicate a throne square also for Tawlbwrdd:
http://tafl.cyningstan.com/page/146/literary-sources

That was taken from Lewis's 1940 article. In the original article it appears to be a version tidied up for print, rather than a facsimile of the original drawing. Until the National Library of Wales decides to digitise the Peniarth manuscript and put it on line, or one of us can make the trip to Aberystwyth, the exact drawing will have to remain a mystery. Bell shows the board without a central square marking, and the original source doesn't mention any special properties of the square.
Top

Ten starting setups for tawlbwrdd 11x11 was tournament tested, and the Tawlbwrdd Lewis cross 11x11 was found to be the distinctly only well balanced setup with no throne, balance -1.06 ( http://aagenielsen.dk/tawlbwrdd_summary.php ).

and directs the reader further on to the F.R.Lewis article from 1941, which can be read on the internet here:
[link virker ikke]

On page 193, F.R.Lewis writes about the Peniarth manuscript from 1587:

The first part, occupying 92 pages, was written by Robert ip Ifan during the month of May, 1587. On page 4, the author fortunately decided to insert a very rough sketch of the board used in tawlbwrdd, from which the diagram below has been copied
- board diagram - 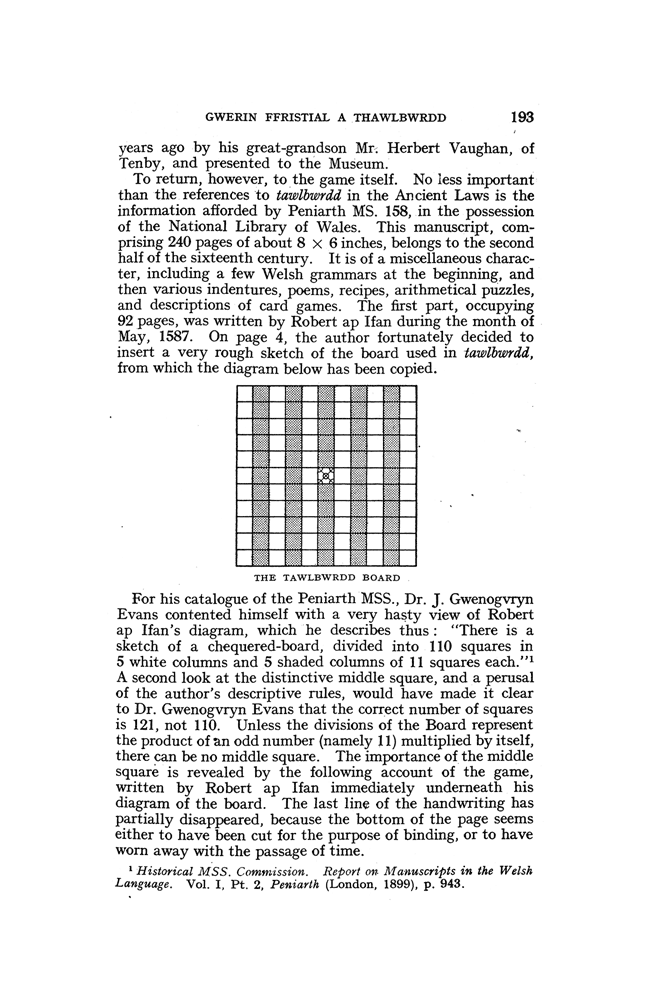 Robert ip Ifan is the original source of information about the Welsh tawlbwrdd, and through F.R.Lewis we learn that ip Ifan describes the board as 11x11 with the only distinguished square being a throne in the center.

So it appears that the Welsh Tawlbwrdd 11x11 indeed has a throne, the same as we know that has the Saami Tablut 9x9.

Now, returning to our ten test tournaments, we found that only two 11x11 setups with a throne are well balanced: 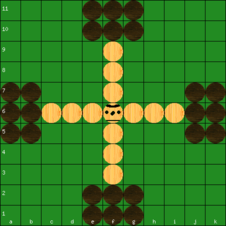 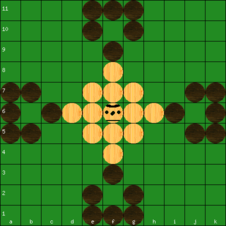 In the light of this, I suggest that the historical Welsh Tawlbwrdd setup is the Tablut Bell 11x11: 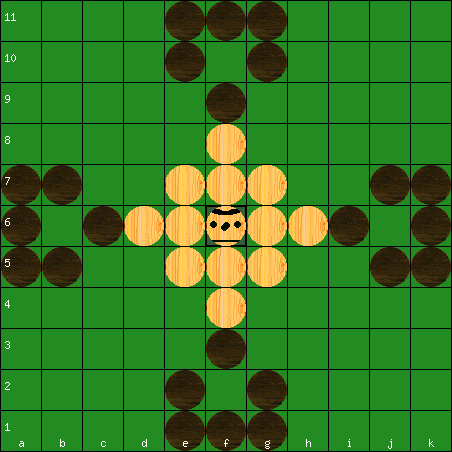 (P.S. At the same time we also learn from the ip Ifan diagram that there exist no such thing as "attackers' base camps" as used in the Foteviken tafl).

Two more test tournaments of the two Tawlbwrdd setups were done to find a best choice for the World Tafl Federation Championship Tournament 2016 round 1.
Both setups were found to work all right, the game balances being -1.13 and -1.17, and both setups gave many good games.
I went through all the games using the Replay function, and this is my opinion:

This attackers' setup fits well with the ap Ifan text "... twenty-four men seek to capture him [the king]. These are placed, six in the centre of each side of the board and in the six central positions."

Gathering all attackers in edge center blocks and thus leaving eight open lines and maximum empty space in the corners, could make one believe that the defenders can slip through all this open space easily.

The test games showed, however, that it's very hard for the defenders (white) to escape. I had a number of games against high rated players, and my experience was that for the defenders the game is very tight and slightly random, meaning that you might be lucky enough to early catch the opponent in a position where his moves can be forced all the rest of the game until white victory, and if you do just one white move differently it all falls apart and white loses.

White's toolbox lacks the Millar Gambit with this setup (attacking f3 ao.), and one player mentioned that he misses it.

This defenders' setup fits well with the ap Ifan text "... a king in the centre and twelve men in the places next to him ...".

This setup allows for the Millar Gambit, and going through the games one finds a lot of interesting and varied game play. This is a game which can take many directions.


The two setups could do with further testing, but for now it seems that the Bell setup would be the best choice for the Championship round 1.

Other players' comments from the small forum:

May 22nd, Jarl Herjan on Facebook, photo of a fine tawlbwrdd board 11x11 with throne and no corners, and diamond-Bell setup, just as we recommend it here.
But also with a dicebox and six dice, and the comment

This is my new Tawlbwrdd (Welsh Tafl) which I had designed. In addition I have come up with a set of rules for Tawlbwrdd that is in keeeping with its literal translation meaning "Throw Board" which suggests the possible use of dice in the game. What I have come up with following my research and playing various versions of Tawlbwrdd is a game that is fun and easy to play with an element of luck and a gamble that would have appealed to Vikings and the Welsh in the early medieval world.

"Throw Board" is an old mistranslation of the word "Tawlbwrdd", Tawlbwrdd simply being the wellknown Scandinavian word Tavlbord = Game Board, in my opinion.

But in any case Herjan has invented an interesting tawlbwrdd variant. How do one play this game?
Top
Post Reply
17 posts