This tafl board was found in Ireland (supposedly for Brandubh):
Ballinderry, Ireland, late 9th century 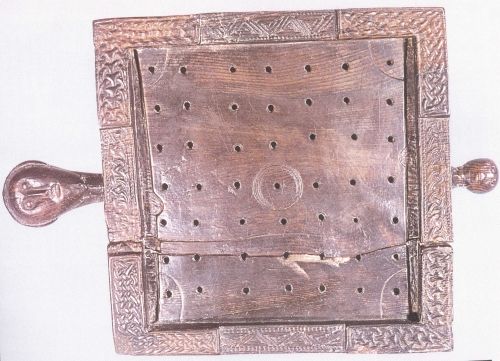 and this tafl board was found in the Orkney Islands, Scotland:
Buckquoy, Orkney, Viking Period

Modern reconstruction of the Orkney board (Antiquity Gamecrafters): 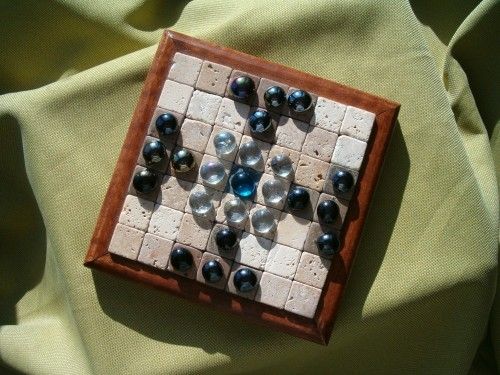 We know that the Historical Hnefatafl rules are well balanced on the 9x9 board with no marked corner squares (Saami Tablut). But reducing the board size to 7x7 would make the Saami game very unbalanced in favour of the defenders. To rectify this, the king can be required to go to a corner instead of the edge, and then the game is balanced again (Irish Brandubh).

An alternative way to rectify the balance is to drop the throne square and with it the special protection of the king in center. Then the king still wins on the edge, and the corners are still unmarked.
We tournament tested this setup and found a good game balance of +1.11 (111 defenders' wins per 100 attackers' wins). 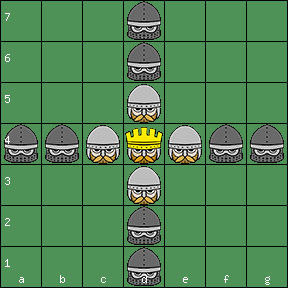 Could this be the ancient Scottish game played on the Orkney board, i.e. the Scottish Ard Ri: Historical Hnefatafl rules but with no throne?
Top

I certainly like the idea better than the one I came up with (weaponless king), and I'm pleasantly surprised that removing the throne's protection is enough to make the game balanced. I'll be keeping an eye on this and keeping my fingers crossed that the balance holds up with further play. Though sadly I don't have the time to participate in the tournaments nowadays.
Top

Various Ard Ri configurations were tested, and the Ard Ri throneless 7x7, which is mentioned above, was found to be still the best balanced.

Yet one strong player, casshern, was able to win all his games, both as black and white, in the Ard Ri-1 7x7 test tournament (board with throne, king moves only one step at a time). This is usually a strong sign that a variant works, however no other players were able to do this, and the measured game balance ended at -2.20.