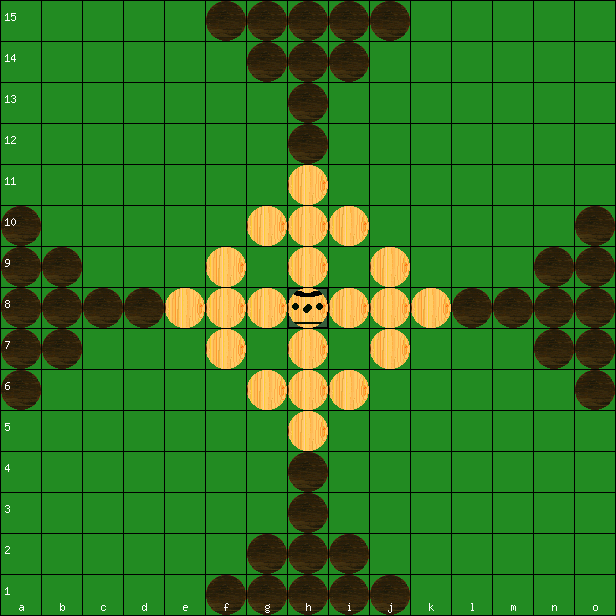 The 15x15 board was tournament tested with the Tablut rules as outlined in the forum note above. The Damian Walker setup was used for the pieces, and the game balanced very well, 117 black wins per 100 white wins.
Top

This is a very interesting layout! I hope to add it to OpenTafl soon.
Top

This is an interesting board I hadn't encountered before. As a paid-up member of the awkward squad, I see an alternative interpretation of the find, though.

The marked square near the top of the fragment looks very much like the central square on the 13x13 Bergen board, which uses a * for the centre and x for the other markings. So I take this for the centre and don't see any marked squares around it. That being the case, there are only six columns to the right of it, with a clear termination that you can see to the bottom right. There are seven columns to the left of it, but the seventh column (counting towards the left) has no terminating border. If this was once covered up with wooden strip as in the boards from York and Trondheim then this would make it a 13x13 board. If there is a missing row where the straight break occurs, then this would give a pattern:

Somewhat less interesting than a 15x15 board, but it does conform to the preference for 13x13 games seen at Bergen and Gokstad, and in the Faroe Isles. I don't remember proposing the Trondheim markings as indicating a smaller board, but my memory may be at fault. In the Oslo case I'd say that the markings are vaguely indicative of layout, helping players to locate the central ranks and files of a large board, rather than each having its own special meaning.

PS. Even if the Oslo board is a 13x13 board, there is still convincing evidence for a 15x15 tafl game in the Anglo-Scandinavian archaeology at York.
Top

cyningstan wrote:As a paid-up member of the awkward squad, I see an alternative interpretation of the find, though.

Please take a look at this full resolution photo of the Oslo board (thanks to Adam Bartley for sending this detailed photo!):
http://aagenielsen.dk/oslofullrez_20140206.jpeg

What can be seen of the marked squares suggests that all marking lines are carefully carved from edge to edge of a square, no sloppiness about that.

Square F4 is clearly unmarked. This means that the length of the x-markings is three; that is, there is a line of three x'es on each side of the board, distanced four squares from the center.

Studying rest of the squares where any marking would be visible, symmetry gives that there are no more markings on the board. Except perhaps for the center square H8, which is damaged, but knowing it to be the center, if you stretch your imagination, one can perhaps faintly see a double lined "*" there.

The rows from row 5 and downwards are preserved from edge to edge, and 15 squares can be counted.

and the complete Oslo board would look like this:

In this forum note I deduced and argued for that the rules are Tablut:
http://aagenielsen.dk/hnefataflforum/ph ... &t=51#p524


I can see your reasoning, cyningstan, it presumes that a row is missing between 5 and 6, and that the columns A and O and row 1 are not board squares. And then a 13x13 board would follow.

However:
On the full resolution photo one can see that the bottom edge of squares M1 and N1 is carefully carved with a double line. This means that row 1 are board squares and alas so the reasoning falls.
Having carved row 1, the carver realized that he'd done unnessecary work with those outer edge lines as the wooden strip marks the edge anyway, and so he spared the work when doing the column A edge.

And also, your interpretation requires the square D6 to be x-marked. And there's no trace of an x there, and although damaged, the square is after all just about so preserved that one could expect to see some trace.

(But I cannot explain the strange crack E5-E6).
Top

Was Historical Hnefatafl played on board size 15x15?

We have tested Hist. Hnef. on the 15x15 board and found that it works. Hist. Hnef. rules are scalable and probably function on any board from size 9x9 and upwards (plus on 7x7 with a couple of adjustments).

The Hist. Hnef. 15x15 has, however, not been popular with the players of this site. The rules work so well already on boards 9x9 and 11x11, a few players occasionally take it further to the 13x13, but apparently there's not a need of an even larger board 15x15.

The Oslo board 15x15 is why we investigated this, but does the Oslo board actually indicate that there was a 15x15 Hnefatafl game? We found from experience that the larger the board, the more elaborated the initial setup will be in order to balance the game. On a large board such as 15x15 it would be very helpful with markings and decorations to hint the initial positions of the pieces. And yet the only markings are in the center of the board apparently marking the setup of the Saami Tablut 9x9 game.

Could it be that the full 15x15 board was used for another type of game with a simple setup and no need of auxiliary markings (draughts and Ludus Latrunculorum are examples of such simple setups). And then provided with the central decorations only to make the board usable for Saami Tablut, too?
Top
Post Reply
15 posts