After this year's World Championship tournament ten players relaxed with a Berserk tournament, and Adam confirmed his position as the number one berserker!

In the game as white against Kratzer, Vonraider performed this berserk run with four knight jump captures: 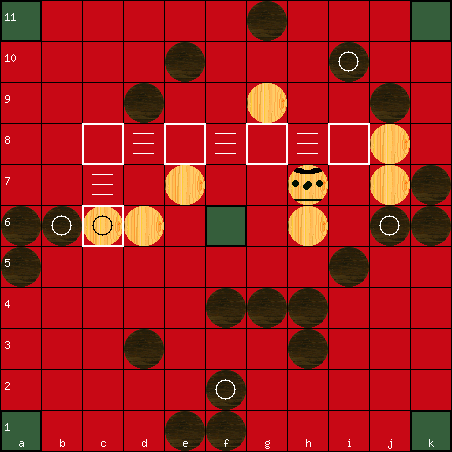 And in the game as black against Fraech, Adam performed this berserk run with a commander starting with a jump and then killing three enemies: 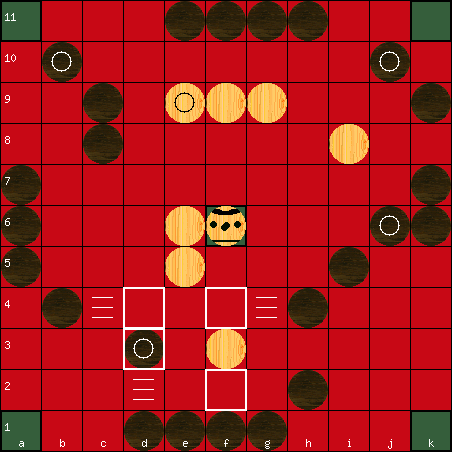 The Berserk Hnefatafl game was invented October 2011, at a time when we struggled with solving some shortcomings of the Fetlar game, fx. repetitions, draw forts, and above all the "Monstrosity Draw Fort" discovered by Crust and Adam.

At this point Adam happened to send a photo of a very interesting set of tafl pieces from the Bergen Museum. Four attackers had top decorations, and two nail holes on top of two defenders suggested missing top decorations for a king and some other officer. So this set suggested a tafl game with three types of officer. I tried to conceive a way which such a game could have worked, and had some sleepless nights in the process.

To build on historical ground as much as possible, solely rules from Fetlar and closely related historical games were considered. The antecedent to Hnefatafl, the Roman Ludus Latrunculorum have two jumping pieces. Now, jumping pieces would be a great way of breaking a draw fort.

The considerations which led to the Berserk Hnefatafl rules, are described here:
http://aagenielsen.dk/berserk_comments.php