MaC wrote:There is stil a undeclared draw-position,m if black blocks all corners each with minimum of three peaces and without enough peaces to capture a lonely king.

Adam wrote: either its a genuine draw; black can't capture, white can't escape, so a draw is agreed (but not forced) Or, white is so depleted that black can in fact abandon the corners with care and ultimately pin down the king.
...
I'd like to hear how the computer will handle this.

The computer is not in doubt. It keeps accurate track of three board positions: overall, white alone and black alone. Eventually someone will repeat a third time and the computer will let him lose (after a warning).

But:
It could probably take such a long time to reach the third repetition that few players would want to wait for it.
Also, a board game, an ancient one at that, should not at any time require computer help, and keeping track of this situation could be so complicated that only a computer can do it.

So, I suppose that if black stays in the corners, the best choice to end the game would be draw by agreement.
Top

Adam wrote:I suggest we see how this finalised version plays in friendly games, and perhaps set up a new mini tournament in the autumn

We could do that.
Top

I agree the genuine draw.
Top

A good logical summary. Nice to see the data fitting the logic.

Could we see the black vs white statistics gathered thus far from the website on these variants on this thread?

Due to everything we've learned about draw threats and how powerfully they can influence the game with experienced players in tournament situations, I am convinced that the Copenhagen revised rules will provide the best balance for a modern tournament tafl 11x11 rule set. I think white will need to master the edge escape fort in order to exploit its threat potential so that black does not become too powerful overall. Its a very good game, forcing both sides to play at the edge of their abilities.
Top

The test tournament under the "Old" Copenhagen Hnefatafl 11x11 rules has finished after four months, and a simple count of the games results gives 34 white wins, 21 black wins and 0 draws, a fairly balanced result and also a confirmation that the rules give few draws.

Re: Images for boards

The shields are a really good idea. Especially if you're playing Copenhagen rules, with the extra "shieldwall" rule! A beautiful hnefatafl set, I couldn't resist clicking on the pieces, like an idiot, hoping they would move
Top

Inspired from our Fetlar tournament these days, I have second thoughts about the Copenhagen edge & throne. 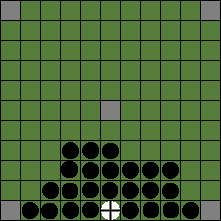 because the king can be forced into the open like this and captured (happened several times in the tournament): 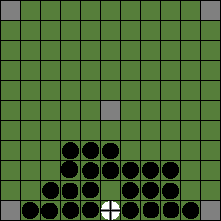 Moreover it's compulsory for the players to move in their turn, so if white is blocked so that he cannot move, he lost for this reason.


The Fetlar edge & throne rules can be seen as logically consistent: The king must in all cases be captured from four sides by any combination of enemy pieces and forbidden squares.
Millar expresses it this way: "The white king can only be captured by being surrounded on all four sides by black warriors, or by three warriors and the throne square." ( http://www.tim-millar.co.uk/section502917_215412.html )
and Uig Historical Society this way: "The object of the game, for the attackers, is to capture the king by boxing him in between four dark pieces, or between three dark pieces and his own central square, in which case the attackers win." ( http://www.ceuig.com/archives/661 )

Here it is not necessary that the throne is non-reenterable and non-passable. Also considering a possible next move for the king after capture is void.

It has a kind of logic to it that like the king can enter a forbidden corner square, he can also enter (reenter) the forbidden throne square. And going there, it follows that he can also choose to continue his move and pass through to another square. While only the king can stop on the throne, this passability of the throne is then normally extended to all pieces (the variants Hnefatafl 11x11, Fetlar 11x11 and Scandinavian Museums 11x11).

With the loss of the center fort option in the Copenhagen variant, the only hope left for the king when effectively excluded from the corners, is the edge fort, and this fort is easier to build when the center is passable.

Using the Fetlar edge & throne rules in the Copenhagen variant would simplify the group of 11x11 variants, as they would all have the same throne rules, and there would only be two variants of edge rules.
(See the Quick overview of tafl variants http://aagenielsen.dk/hnefatafl_rules_overview.php ).


In the 9x9 board variants the throne is non-reenterable and non-passable (the variants Foteviken and Ashton Lapp Tablut 9x9). This makes sense as such a throne makes the small 9x9 board topologically larger.

Re: Images for boards

skallatorc wrote:I'd like to offer them here if they can be put to use.

crust wrote:The shields are a really good idea. Especially if you're playing Copenhagen rules, with the extra "shieldwall" rule!

I also think the shields would be well suited for the Copenhagen variant, if the pixel size of the images fits the squares.
Top

I agree with keeping the throne open in copenhagen, providing one is forbidding board repetitions its not a problem. And yes, the edge fort exit would be trickier with a blocking square in the centre.

I'm not sure i agree with the logic of compulsory moves meaning white would lose in the zombie situation, I would say this is a legitimate stalemate due to black being foolish. After all, white can't move because of black blocking them, not because they don't want to move. The stalemate possibility leads to a good deal of important leverage strategies.

I like the idea of exploring blocking squares on the board as it Foteviken. And keeping copenhagen as simple as possible until we are convinced it really functions well as a balanced tournament rule set is probably the right way to go.
Top

shieldwall capture.JPG
quick question about the shieldwall rule:
If the position bottom left is a legitimate shieldwall capture, then presumably the corner bottom right which would be safely blocked under fetlar rules is vulnerable under copenhagen rules?
Top
Post Reply
152 posts