The historical period 1-400 A.D. is in northern Europe named the Roman Iron Age because of the vast influence from the great Roman Empire just south of the area. Many northern European warriors served in the Roman army and there became acquainted with the widespread Roman war game Ludus Latrunculorum ("Latrunculi, soldiers"). Returning to their home lands, talented gamers modified the game into tafl, replacing the model of Roman warfare with the homely, iron age way of warfare.

Latrunculi is based on the custodian capture rule which is also the basis of the tafl game.

Robert Charles Bell's book "Board and Table Games from Many Civilizations", published 1960, republished 1969 and 1979, tells about "The Latrunculorum Group" of board games that descendants of this game are found in Somalia and in northern Europe, both areas previously bordering to the Roman Empire.

In Somalia still exist the games Seega and High Jump, both based on custodian capture. The rules of both games having very much in common with Latrunculi and tafl, one notices specifically two interesting rule details: In both games the player may continue to move the same stone as long as he makes captures with it; and High Jump has an alternative way of capturing by jumping over an enemy piece.

R.C. Bell notes that Seega and High Jump may be survivals of the Roman game, each preserving one of its forms of movement and then suggests these rules for Ludus Latrunculorum:
1. Using an 8x7 board each player has 16 pieces. They are placed two at a time by alternate turns of play anywhere on the board. During this first phase no captures are made.
2. When the 32 pieces are in position each player adds a blue piece to the board. This is the DUX. The second phase the begins. The pieces can move one square orthogonally in any direction.
3. A capture is made by trapping an enemy piece between two of one's own pieces on rank or file.
4. When a piece makes a capture it has another turn, and from this it follows that an isolated piece may endanger itself and several of its fellows by starting a sequence of captures.
5. The dux may move in the ordinary way, or it may make a short orthogonal jump over an enemy piece, landing on an empty square beyond. It does not capture by this maneuvre, unless it traps another enemy piece between itself and one of its own men. The power of jumping enables it to penetrate a defensive position which may start a whole series of captures from within a walled stronghold. It is captured in the same way as any other piece.
6. A piece may move between two enemy pieces without being captured.
7. The game continues until one player has lost all his pieces, or a blockade has developed which neither player can break. The player with most pieces left on the board then wins.
8. If no captures have been made in 30 moves a blockade has been established and the game is over.

Latrunculi being the role model for Hnefatafl, one notices that two interesting Latrunculi game rules, 4 and 5, are missing from the Hnefatafl reconstructions.

September 2011 Adam Bartley sent me an interesting link to the Nordvegen History Centre, which showed a photo of Hnefatafl glass and amber playing pieces from Bergen Museum. 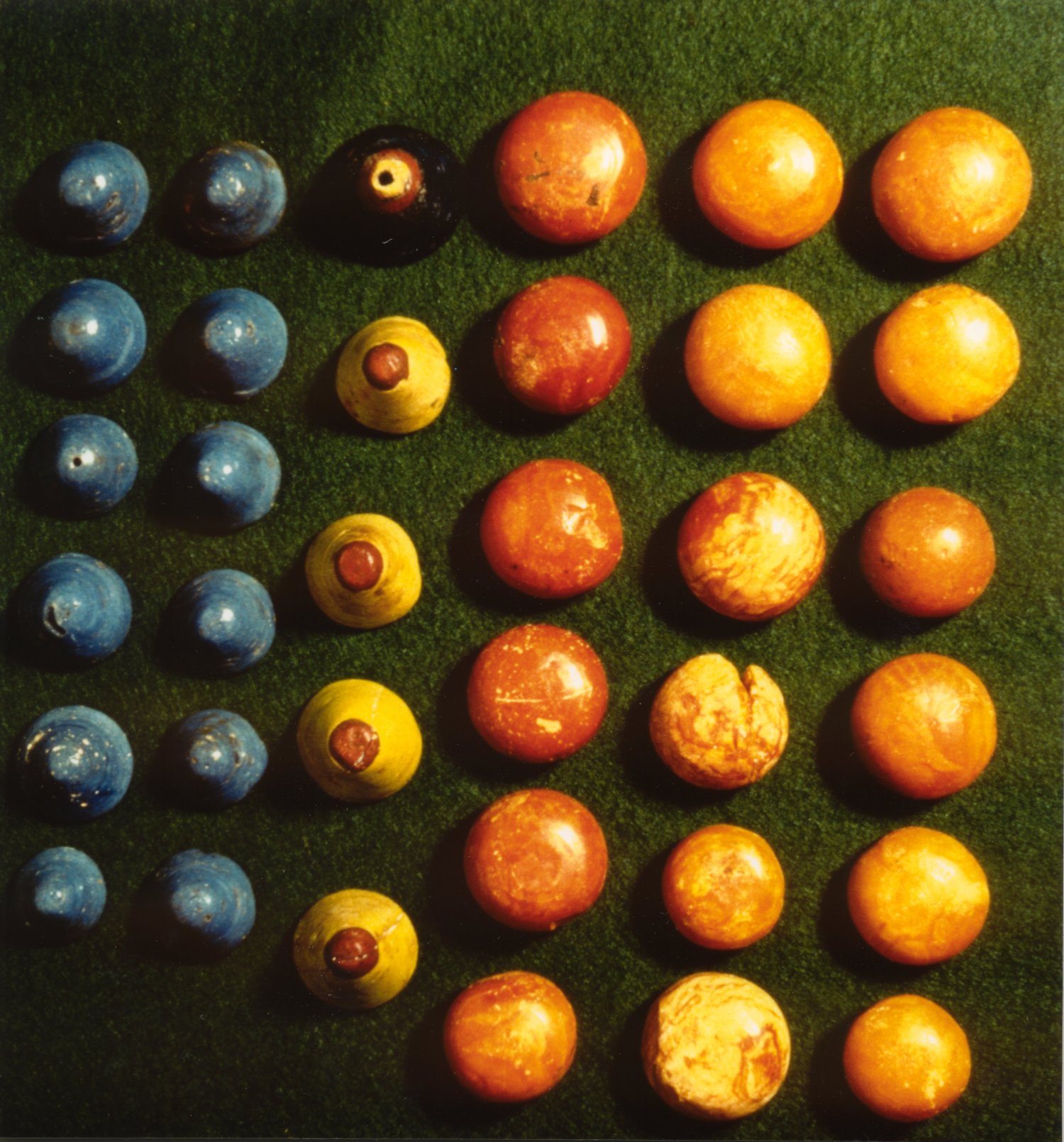 My comments on the Storhaug photo.

Now, what if these pieces are one set, and not two sets as the museum presumes? The total collection is 1 black, 12 blue and 24 yellow pieces, which is precisely what it takes for one 11x11 Hnefatafl board game set. However, this game set is unusual in that it has four types of pieces instead of the usual two. Usually there are men and one king; but here there is a special piece more on the king's side, and a special piece more on the attackers' side (four of them).

Why is this game set so unusual? Perhaps it was prestige for a top ranked viking king to own a hnefatafl game set differing from and more sophisticated than the common vikings'?

After productive discussions with Adam Bartley on Viking war ethics (se insert below), to me these playing pieces tell a story of drama:
Four Viking long boats, each with a ship commander and his crew of warriors, has landed on the coast of a foreign country, near a castle where a king has barricaded himself with his warriors. The Vikings have surrounded the castle from four sides, each side grouping a commander and his men. The large, yellowish / reddish pieces are the blonde Vikings, represented by a light color, and to that the color of blood and burning fire. The smaller, dark blue pieces are the opponent, represented by a dark color, the color of the cold ocean.
Being a Viking game, the viking hotheads would probably identify themselves more with the orange fire-pieces, that is the attackers!

With a look at the reconstructed Ludus Latrunculorum with the two extra rules, and related ancient games and the Storhaug set of playing pieces with some of them distinctively decorated, Aage Nielsen, Denmark, proposed a Hnefatafl version for this set of pieces, which could be named the Berserk Hnefatafl version.

Explanation of the rules derivation.

The Berserk Hnefatafl rules are deduced from combining the Fetlar Hnefatafl, the R.C. Bell's reconstruction of the Roman soldiers' game Ludus Latrunculorum, the Somali related games Seega and High Jump, the Saami Tablut, and the Bergen Museum set of Hnefatafl playing pieces from Storhaug.

The logics behind the rules are this:

The Bergen set of playing pieces include a king, 12 defenders and 24 attackers. This number of pieces matches the 11x11 game board. Four of the attackers are distinctively decorated, suggesting they should have a distinct position on the board, fx. in front of the ordinary attackers. So the initial ordering is that of Fetlar Hnefatafl.

This far, the rules are identical to Fetlar Hnefatafl.

Now to the additions:

The Bell's Latrunculorum reconstruction allows any piece to continue moving as long as it makes captures. So do the Latrunculorum Somali descendants Seega and High Jump. This rule is introduced to Berserk Hnefatafl as the Berserk rule (or re-introduced, as it has perhaps been there but was lost in time).

The game now has three types of officers, the king, his knight and the ship commanders. These must have some kind of special abilities.

The Bell's Latrunculorum reconstruction allows the Latrunculi officer, the Dux, to jump over enemies. Introduced (or re-introduced?) to Berserk Hnefatafl, the three types of Hnefatafl officers, the king, the knight and the commanders, should be able to jump over enemies.
Such an attribute is much needed to make it possible to break draw forts.

As in Bell's reconstruction the Dux'es are captured the same way as any other piece, so are the knight and the commanders.

There is good use for a piece which can block the way between the powerful king and a corner, especially with the king's new ability to jump over an enemy and right into a corner square. This would be an obvious task for the attacker commanders, with introducing of a rule that the king cannot jump over a commander. With such a rule in effect, it is natural to generalize, so that the rule applies to all officers, meaning that the king, the knight and the commanders cannot jump over each other but only over ordinary pieces.

Another flavour of extra power to the attacker commanders can naturally be that two commanders can capture the king (with custodian capture) instead of the normally required four attackers. And just like the hostile king's squares can function as an enemy piece in ordinary custodian captures, it is logical that the king is captured by one commander against a corner square, the corner square functioning as a second commander.

If the king is always allowed to jump over enemies, it will be nearly impossible to bring four attackers in place to capture him. Therefore this ability of the king's must be limited in some way. A natural bid would be that he can jump only to and from the five king's squares but not jump enemies in the open field.

The king has only one special helper, the knight. To give the knight some extra ability, it was tried to allow the knight to enter the five king's squares just like the king. But test games revealed that such a rule made the knight of very little use beyond that of an ordinary defender.
In the search for some other ability for the knight to have, one notices that the Somali descendant of Latrunculi, the game High Jump has an alternative way of capturing by jumping over an enemy piece, in addition to the custodian capture. This ability given to the knight makes him a very powerful piece, which fits with the observation that there is only one distinctively decorated defender besides the king in the Storhaug game.
The suggested move pattern for the knight makes him the only piece on board killing enemies all alone, with no help from comrades or king's squares. The move pattern looks like the behaviour of a warrior on horseback - the knight armed with horse and sword, jumping over enemies with his horse and killing them off.
The attackers arrived in long boats and cannot bring horses.

More about the Berserk Hnefatafl in our forum.
Berserk test tournament.
The measured game balance is +1.20 (120 white wins per 100 black wins), which is a fine balance.